*Desktop is recommended for the best viewing experience.

How to Build a Universe, an exhibition at the Meat Market Stables in North Melbourne, repudiates the imperialist and eurocentric way of building knowledge in the traditional ‘universal’ museology and its proliferation of inequality and post-colonialism in our understanding of the world. The ‘universal’ model, developed in the 16th century Europe, is a eurocentric way of treating artifacts (often stolen) as something to reveal secrets of the ‘unknown’ (or non-western) world, which sadly, many museums still employ. To combat this, the curator Eliza Coyle and the four artists – Hannah Toohey, Daniella Ruffino, Chaohui Xie, and Jacqueline Felstead – offer an alternative worldview through a microcosm perspective on the merging lines of art and science.

To provide you with more background information about the ‘universe’ theory referred in the exhibition’s context, it views a museum as a place of collecting and uses amassed ‘wonderful’ objects from the imperialist expedition as self-learning tools about the ‘foreign’ or non-western cultures. In other words, a museum used to be a vast “theatre” (Samuel Quiccheberg, 1565) of looted items stored and displayed in justification of stimulating and preserving ‘knowledge.’ If you are picturing a room full of stolen artifacts and stuffed exotic animals inside glass cases, or reminded of UNESCO’s report that 90 per cent of Africa’s cultural property is now located overseas, you are on the right path. The ‘universe’ museology perpetuates coloniality and only produces (in my opinion) colonised knowledge. Within the post-colonial structure, context, and approach, it functions to serve a white audience and fails to escape from the ‘default’ western viewpoint. As a Korean who had so many frustrating moments with the presentation of Korean cultures in western museums (aka NGV), I welcome How to Build a Universe‘s epistemic disobedience and attempt to form a democratic relationship with the public.

These artists comment on the impossibility of a completele, objectvie representation of the world . . .
Through their works and experimentation, we can adopt multiple perspectives as if we’re looking in at the world through a microcosm of different, speculative lenses. – Eliza Coyle

How to Build a Universe achieves creating discussions beyond the mere concept of inclusion, as evident in Eliza’s collaborative exhibition-making processes. Her effort to amplify and document the artists’ voices is clearly shown in the artist interviews. The guided tours also create additional access points of the exhibition and its conversations or ‘learning’ (generated within the artists’ narratives rather than ‘presented’ as an object). Eliza also successfully leaves enough room for a viewer’s creative imagination by generously spacing out each installation throughout the venue’s large open floor. The raw industrial and architectural features of the Meat Market, including the dark roof frame columns of the warehouse contrasted with the brick walls painted in white, complement the artworks very well.

Inside Melbourne’s renovated arts venue with almost 100 years of meat trading history (it stopped operating in 1974 and is now a heritage site), the four artists speak through the stillness in restricted times as another lockdown looms over the city. Here, I will take you through photo documentation of How to Build a Universe, almost like a virtual tour. The photos are in the order of encounters.

The tangled lines in Chaohui’s world mappings on four Perspex panels hung from the ceiling represent the diminishing boundaries and dislocation. The panels overlay each other, creating different line intersections depending on where you stand, becoming one big landscape piece. The work comments on the clashing individuals and loss of self in “a perpetual state of chaos”, as the artist describes.

Hannah’s version of flora and fauna, the mass of black fabric stuffings and faux fur individually hung from the ceiling, almost looks like a growing mould contaminating the white wall. This ongoing installation project reflects on the accelerated destruction of the natural environment due to mass consumption and pandemic.

Maps are a key device in Jacqueline’s artistic language of understanding the world. Through a 3D photogrammetric survey of the snowy mountains of Banff in Canadian winter, she re-creates and re-imagines atlases into an emphatic geographic representation. It is an abstract and interactive way of finding narratives within landscapes that rejects the generic and replicated process of traditional mapping.

Maps are an important means of articulation national territories within narratives of humankind.
– Jacqueline Felstead

Just like Progeny, Hannah’s second installation Scuttle is also an ongoing project of accumulating mass. Little creatures, a total of 504 pieces made of stuffed calico, hemp twine, antler tips, and beads, stand in a crowd in an illusion of movement on the floor, as a symbol of unsustainable population growth and climate crisis. They are hand-sewn by the artist, which is a penetrating medium across Hannah’s repetitive art-making processes. A juxtaposition of what is traditionally perceived as a feminine craft with the masculine style of taxidermy-mimic blurs the boundaries between “art and science, real and fabricated.”

Similar to Hannah’s time-based and laborious processes of making, Daniella also produces artifacts of her own. In a total refusal to purchase new supplies and devastating means of construction, she makes her own cement out of natural materials and waste. She heats up excess oyster shells collected from Melbourne’s seafood market into calcium-carbonate. Then mixes the ash from a fire pit with “salvaged terracotta to create potash, which produces a version of roman concrete.” Endless/Column, made from the artist’s handmade cement, explores alternative ways of manufacturing and depicts the insensitive concrete designs in our urban suburbs she observed within the 5km radius under the lockdown restrictions.

In the ironic era of isolation in the most globalised society in human history marked by outbursting digital communications and trades, increased human activities, and fast population growth, How to Build a Universe responds to the theme of dislocation, mass consumption, nature, and climate crisis. As a collective, they generate crossing narratives exploring these issues and present unique perspectives to view the world culture align with Eliza’s strong curatorial intent to deconstruct the ‘universe’ museum model and to advocate understanding the world through multiple layers of different voices. 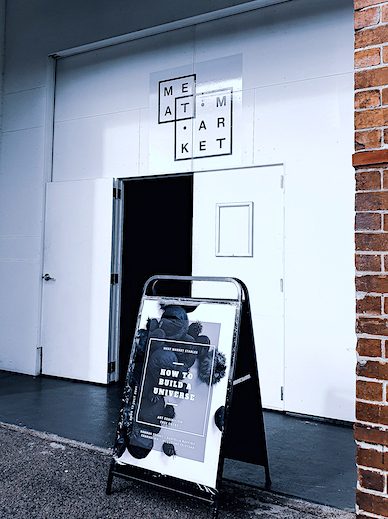